Kitchen Upgrade on a Budget – Painting the Cabinets. Part One.

No, you’re not seeing things; you get two posts in one day!

Today we were ready to tackle the cabinets. Lyle has mostly recovered from the floor adventures (apparently it was quite a workout with all the up and down and pulling on stubborn carpet) and I wanted to get going ASAP so the floor can follow.

Lyle took the doors off one set of cabinets while I was gone to work and marked where they belong. We discussed how to do things and agreed that for now, leaving the hinges on the doors was a smart choice. We’re going to take all the doors off, paint the frames, and then move hinges from the doors back to their original places on the frames, and finally paint the doors. While it logically shouldn’t make any difference if hinges get moved around, this is one of those things that if we don’t keep them in their original spots, it will, somehow, come back to bite us.

I borrowed some storage totes from Dad so we had somewhere to put all the stuff we’re taking out. Let me tell you, those cabinets hold a LOT of stuff. A lot.

came out of these cabinets: 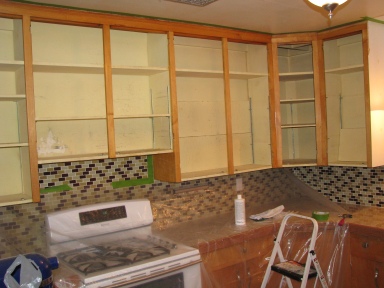 And those represent about 1/3 of the cabinets. We may have to either reconsider unloading the cabinets, or do one section at a time to avoid completely running out of totes. At some point in the future we’re going to have to do something about the inside of the cabinets, because they’ve been painted at least twice and it’s in terrible shape and chipping off. As much as I want it done, though, I have absolutely no desire to be the person who paints them, so it won’t be part of this project. I know that long-term, it would save time to do it now while they’re already empty, but it’s just not going to happen.

The first step in actually painting the cabinets is to degloss. The kit comes with two bottles of deglosser and plenty of scouring pads. This is a relatively labor-intensive process, but nothing complicated. You just have to pour the deglosser on the scouring pad and scrub everything down really well. Then you wipe with a damp rag followed by a dry rag. Repeat until the damp rag comes back clean. This section of cabinets took me around 45 minutes or an hour.

While I was doing that, Lyle was removing the apron from above the sink. Another feature of my kitchen that I’ve never loved, it lends to the very country feel of the room and I didn’t want to update everything else and leave that.

Fortunately, Dad left his reciprocating saw and there was just enough of a gap on the right side of the apron to be able to get the blade in and cut the nails without doing too much damage to the wood. 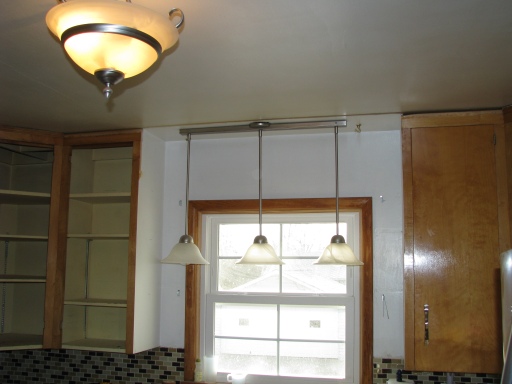 It already looks better completely without the apron, but we’re going to take it down to the lumber yard and have them rip it down so it’s just straight across. That way, the base of the lights will still be covered but it will have a more contemporary look. We may shorten up the light fixture so the individual lights don’t hang down so far, but we’re not sure whether it’s possible or not. The good thing is that it’ll be relatively simple to take the fixture down and find out – nothing like the good time we had putting it up. The apron was very much in the way when we did that and made it a much more difficult job than it needed to be.

After the deglosser step is done, we let everything dry for about an hour and then put on the first coat of paint. This step went very quickly and was pretty simple. Everything I’ve read said that you’re better off to do several very light coats instead of one heavy coat, so I was careful not to get too crazy with the paint. An hour or so after the first coat, it was dry to the touch so I did the second. I may decide in the morning, with better light, that a third would be beneficial, but there will be plenty of paint and it takes almost no time so I don’t mind either way.

The grey paint gives the room a completely different look than what we originally imagined, but I think it’s going to really look nice when it’s all done. If it doesn’t, I won’t be admitting it because the grey was my idea (even though Lyle agreed with me).

The doors are headed downstairs into the room that got almost gutted when we had our little water issue a while back (Did I forget to post about that? It’s a fun little story – not.) to be dealt with in a nice, out-of-the-way spot. I think tomorrow’s plan is to get the rest of the doors taken off and frames painted, but that depends a lot of whether I end up having to work all day. I’m hoping for not but we’ll see what happens.

This entry was posted in Uncategorized. Bookmark the permalink.

2 Responses to Kitchen Upgrade on a Budget – Painting the Cabinets. Part One.